83-Year-Old Grandmother Has a go at a Beer Bong

When 83-year-old New York-native Frances Levine could not attend her grandsongraduation from the University a year ago, she made it a point to visit campus this year. “I try to visit all the colleges of my grandchildren”,Levine explains. 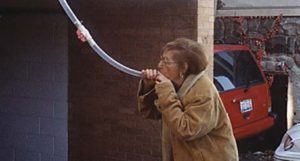 With plans to visit her granddaughter, LSA sophomore Allie Levine, Frances’ son Murray Levine arranged for her to visit the University Nov. 12 and attend the Michigan football game against Indiana. As the Levine family made their way from Allie’s Delta Phi Epsilon sorority house to Michigan Stadium, Allie warned her grandmother about the party-heavy atmosphere and the drinking that goes on during a Football Saturday in Ann Arbor. Frances found out first-hand when her group stopped at 914 State St., the apartment building known for its three-story beer bong.

Many students were standing around the bong, a large funnel at the top, followed by nearly 30 feet of tubing. Few students were attempting the beer bong and those who did were getting drenched in beer. But Frances decided to give it a chance.

“My mother got closer and closer and said ‘I think I’m going to give it a try’,” Murray said.

Frances said her family was baffled by her curiosity and interest in the college tradition. “They said,’You can’t do this!’and I said’Why not?'”

Murray asked one of the students controlling the beer bong if he would lend his coat to Frances so she would not get covered in beer like those who had gone befor her. Frances requested that the guys put just a little beer in the bong. According to Korycinski, he usually uses two 16-ounce cups of beer for each person, but for Frances, he gave her just one 12-ounce beer.

When Frances started to do the beer bong, students in the vicinity erupted in excitement and enthusiasm. “They were yelling’Go, go, go, go, go!”  Murray said. “The guy with the jacket slapped her five and all,” Allie added. 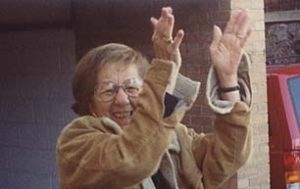 Frances enjoyed herself just as much as those around her. “I loved it. I felt great. I felt young , not that I feel that old,” Frances said. She especially enjoyed the response she got from the students. “I loved the kids cheering me on.”

“On a day like that, to see her hit it was pretty amazing,” Korycinski said.

In fact, Frances became a bit of a local celebrity that day. After the game while she was waiting for Murray to get the car, she was immediately recognized by a group of guys. “They said,’You’re the woman who did the three-story beer bong!'” Frances recalled.

Frances said the best part of the entire experience was the enthusiasm and cheers of the students. “I love everything about the kids. I want them to drink less, but I guess I’m a little old fashioned.”